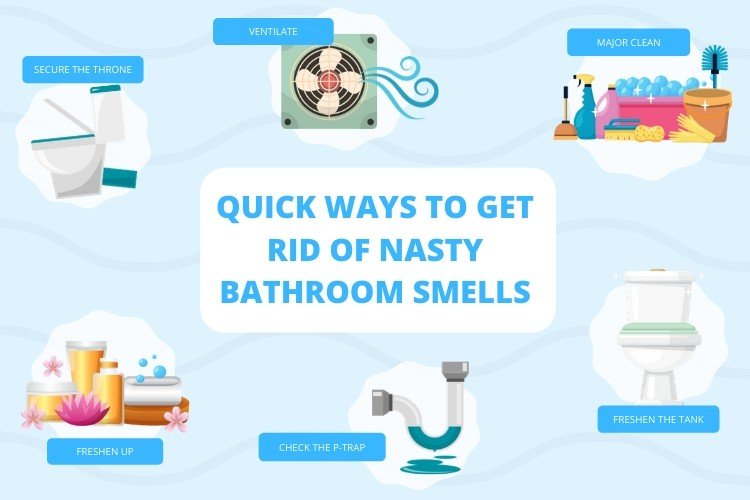 The toilet and bath are the most often used rooms in many homes. They provide hygiene at the start and end of each day and are utilized as often as necessary when we have to relieve ourselves throughout the day and night.

But foul smells can develop in our toilets for various reasons: accumulated waste, poor ventilation, and drainage problems. Here are common unpleasant odors and their probable causes, and what you can do to get rid of them.

The most common but temporary smells are caused by improper or inadequate cleaning. Trash may have been left uncollected in the waste bin. Pee may have splattered on the floor or behind the toilet. Dirt, hair and soap scum may have settled and thickened at the bottom of the drain. Food bits on the sink, splatter on the splashback, stains in the toilet bowl — all these breed germs and odors. Additionally, molds and fungi tend to accumulate in damp, hard-to-clean areas. But all these are short-term issues that can easily be solved with proper and regular cleaning.

If you smell something that reeks of sewer, though, there might be a problem with your p-trap.  The p-trap is a P-shaped pipe that holds a small amount of water in it to prevent sewer gas from wafting into your home. But sometimes the p-trap dries out and gases escape into the room.

An odd and really stinky smell you should be worried about, though, is that of sulfur or rotten eggs.  That’s a more serious problem that might be caused by bacteria in your water supply — especially if you’re using well water.  Find out if the smell is coming from the drain or from your water source.  Get a few drinking glasses and fill each with water from the different faucets.

If they all smell like sulfur – harmful bacteria may be present in your water supply — for which you’d need to call your water authority. If just one glass smells, then only a single pipe may be contaminated and your plumber could fix that problem. If your bathroom does smell like sulfur or “rotten eggs” click here for more specific tips.

Tips For Getting Rid of Bathroom Smells

But for simpler issues like the previous ones, here are tips to help you get rid of the funk, fast.

By any means, keep bathroom windows open.  Stale air is stuffy, and the more it’s trapped inside a closed space, the mustier the place smells.  It gets worse in wet, humid weather because bacteria, molds, and fungi thrive on moisture.  If your toilet doesn’t have a window, install a vent fan — if you haven’t already.  (Note, fans should be flipped on before people shower or do their business, not after.)

As an option, you can leave the door open when no one is using the bathroom.  Also, remember to hang wet towels flat — spread out, with good airflow — to allow them to dry quickly.

Replace the ones that need replacing, and the same goes for window and shower curtains.  Additionally, remove dirty laundry from the hamper and clothes or bathrobes behind the door that needs washing.

Do a Major Clean

Routine cleaning should be done at least once a week — probably more if you have a lot of users, especially young boys.  But a total scrub is necessary at least every couple of weeks. Sponge, scour and brush everything within reach.

From sink to counter, mirror to the floor, bowl to the tub.  Pay extra attention to tile grout, nooks and crannies around faucets, drain covers, shower doors and frames.  If water flow down the drain has slowed because of accumulated debris, use a cleaning solution that will dissolve hair, soap scum, and other odor-causing sediments.

Most people don’t pay attention to the toilet tank, but moisture in any closed container that’s been left unattended for a long time can grow molds. First, flush your toilet to drain the tank. Take the lid off, then drop half a cup of white vinegar or baking soda, or a few spoonfuls of liquid soap, into the tank.

With a long-handled scrubber like the toilet bowl brush, swish the water around and gently scrub the bottom and sides of the tank. Leave it for at least 15 minutes then flush 2 to 3 times. Check to see if there’s residual mold or grime along the inner walls of the tank and if yes, repeat the process.

Shine a flashlight down the drain to see if the p-trap has dried out. If you see water, it’s okay.  If you don’t, it may have dried out because of infrequent use.  Dry air during wintertime also causes p-traps to dry out.

Run some water down the drain and it will automatically catch some and restore itself.  If it’s a sink or tub that isn’t used often, consider pouring a few ounces of mineral oil down the drain. The oil evaporates much slower than water and should keep the odor from coming back for a few months.

Baking soda is a great odor absorber.  Fill a small bowl or uncovered mason jar with it and leave it in the bathroom. It will neutralize any odious or pungent smells.  You can opt to put a few drops of your favorite essential oil to add some fragrance.  Just replace the contents of your “D-I-Y bathroom freshener” every month.

Looking for other natural ways to remove odors – check out this comparison of Gonzo Rocks vs Moso Purifying Bags.

You can use a variety of natural elements to freshen the air and add fragrance in your bathroom:  lemon slices, flowers, herbs, eucalyptus leaves, potpourri.  You can also make a D-I-Y air freshener spray to keep handy in the bathroom.

Just fill a small spray bottle with purified water, a tablespoon of witch hazel (or, alternatively, alcohol or cheap vodka) and several drops of your favorite essential oil.  Spray the solution periodically on the counter, sink, toilet, shower, and floor.  This will not only freshen the air but also clean the surfaces instantly.

If you found this article useful, you may want to check out our list of ways to keep your bathroom smelling fresh naturally.  Also adding one of these cheap and simple hair catchers can keep smelly hair drain clogs to a minimum.

Check for any leaks around the base of the toilet seat.  A wax-like material seals the point between the toilet and the drain, and odor can leak out if this seal has been damaged by wear and tear or by improper installation.  You can fix this yourself by replacing the wax seal with a newer universal rubber gasket,

These avoid the waxy mess and generally gives a better seal since the neck of the seal goes down into the toilet flange and is universal since it works with any type of flange – above, at or below floor level. One main benefit is that it can be repositioned- one major drawback to wax since if you mess it up the first time you most likely have to replace it. Just make sure you first remove all of the wax residues from your old wax ring to get the best seal!

Keep in mind, this is only necessary if you first find a toilet leak coming from floor level (where the toilet base meets the floor). While this is not a particularly difficult job, you’ll need to set aside a couple of hours to do this. If you’ve installed a toilet, you know the drill since one of the steps of the process of installing or replacing any toilet. If not, you may want to hire a plumber for this job. 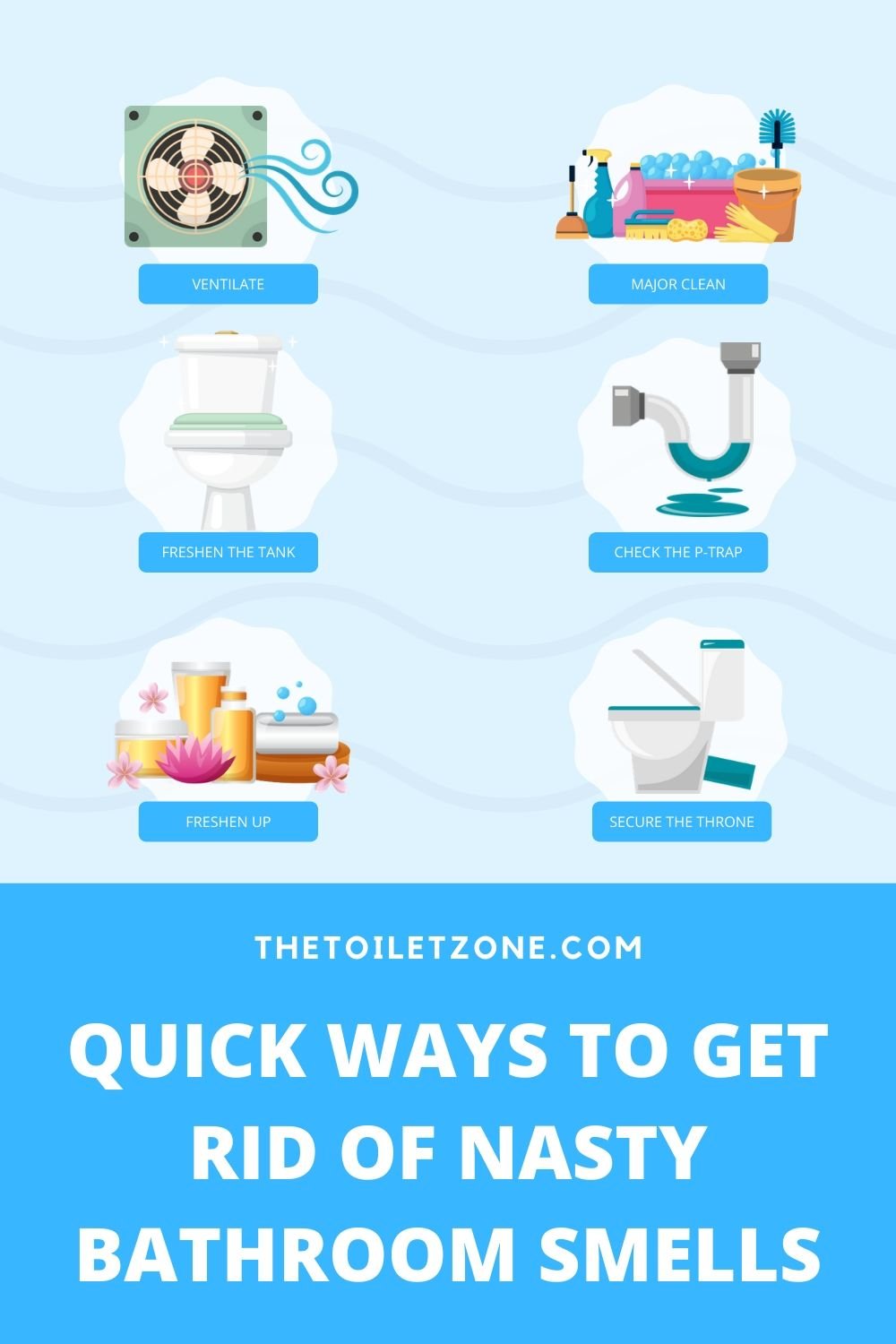 The post 7 Quick Ways to Get Rid of Nasty Bathroom Smells appeared first on The Toilet Zone.