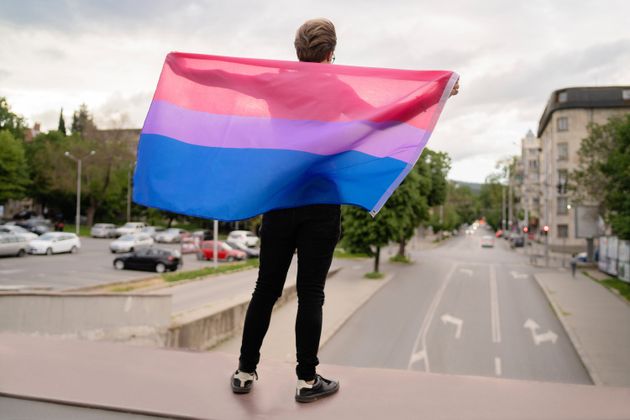 "It’s easy to feel like being bi is being half-invisible no matter what you do."

When I realised I was bisexual, I was in a happy long-term relationship with a man. Even after I’d acknowledged the label to myself, it took me a long time to tell anyone else.

Coming out as bi felt paradoxically like the biggest risk in the world, and frankly, a bit pointless. I was in love with someone and didn’t want him thinking it meant I felt differently about us. And as well as the obvious fear of someone responding with prejudice, I didn’t want people’s perception of me to change either, especially not towards the (false) stereotype of an indecisive, attention-seeking bisexual. It was easier to stick to the status quo.

It’s likely you know more bisexual people than you think. The ONS statistic that 385,000 adults in the UK label themselves bisexual “significantly underestimates the bi population”, according to Stonewall’s Bi Report.

We’re also we’re less likely to be out: only one in five bi people are out to friends and family, compared with three in five gay and lesbian people.

I wrote my novelDouble Booked in part as a thought experiment about my relationship with my bisexuality. Through Georgina, the bi heroine, I worked through alternate scenarios, riffing best and worst outcomes, including coming out, making our relationship open, even breaking up. Writing helped me realise I was ready and wanted to come out, especially to my partner. 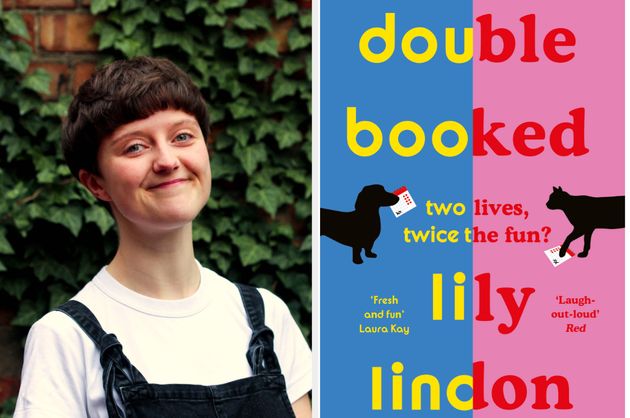 Lily Lindon: 'I wrote my novel in part as a thought experiment about my relationship with my bisexuality.'

The irony is that even when I did, my bisexuality continued to be pretty much invisible. Bi people are habitually defined by their partner’s identity, rather than their own – all of which contributes to bi erasure, as other bi women I spoke to confirmed. This is true even if you’re in a same-gender relationship.

Iris*, a 27-year-old publicist from London, is in a long-term relationship with a woman. “I definitely experienced differences being bi in a straight relationship – I used the term defiantly then, like I had a point to prove. Now people don’t think to ask and assume I’m lesbian,” she tells me.

Meanwhile, if both you and your partner are queer but different genders, you’ll likely be read as straight. But there are two sides to queer identity: internal and external. Even if your bisexuality isn’t visible on the street, it can still be affirmed within your relationship.

As Robyn*, 24, a London-based actor, says: “In my only other relationship with a man, he was very straight and although he accepted I was bi, I feel like I turned that part of myself off for the time we were together. My current partner is a man but also bi, so there’s this mutual understanding of how the relationship fits into each of our sexualities.”

So, how can we erase bi-erasure? Part of the problem is not having enough models of what being a “visible” bisexual looks like. The good news is this means we get to create them for ourselves!

Here are seven ideas for how to affirm your queer identity while in a ‘straight’ relationship:

Engage in queer culture – with or without your partner

There’s more to queer culture than Drag Race – the current Netflix sensation Heartstopper has some lovely bi representation. Watched with your partner, queer stories can be conversation starters and points of connection.

If you want to expand your music, start with a favourite queer song or band and see what else their fans listen to: my repeats include Muna, Janelle Monae, Japanese Breakfast, Shura, and Maricka Hackman.

And of course, read. Booksellers at queer bookshops like Gay’s the Word and The Common Counter will help you browse their amazingly varied selections.

Spending time with other people in the community is a delightful way to normalise your identity and support each other’s experiences. I found it so helpful to get out of my own head, and to articulate feelings with friends who had been through similar experiences. You can also go ‘out out’ with them…

There’s no-one on the door policing whether you have a queer partner! You don’t have to just go clubbing at gay clubs – there are all sorts of inclusive spaces and events. Look up whether your favourite hobby has a queer meetup. And to learn more of our history, visit Queer Britain, the UK’s first national LGBTQ+ museum, which has just opened in London’s Kings Cross.

In Double Booked, my bewildered heroine thinks she needs to dress differently in her ‘straight’ life (dresses, heels, make-up) than her ‘gay’ life (Doc Martens and double denim). Again, there’s no costume you need to validate your identity, but you might find it an empowering way to express yourself.

“Clothes choice is a big thing for me,” says Beth*, 27, an educator from Edinburgh. “Going ‘less feminine’ and for comfort makes me personally feel better. Resist both the male gaze and bi erasure by wearing boots and men’s jumpers!”

Show up as an activist

Being part of a marginalised group means showing up to help however you can. Donate, join marches, share info, sign petitions, and write to your MP. If you don’t know where to start, follow activists you admire on social media and support their causes – such as the campaign to ban conversion therapy. 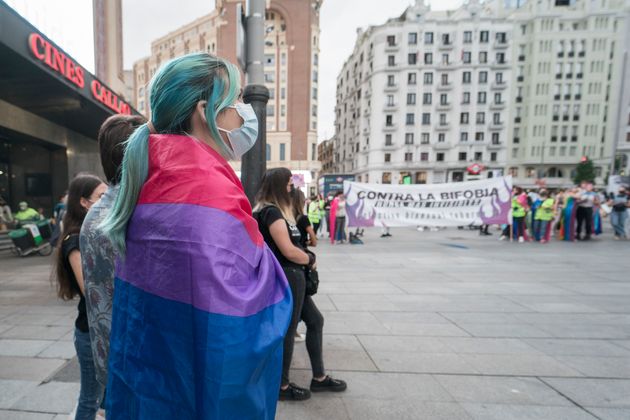 Queer your other activities

There aren’t any rules about what is or isn’t queer. For Martha*, a 28-year-old journalist from Manchester, it’s about “looking for queer angles in other aspects of my life. For example, I do a lot of things at synagogue, and my rabbi has given me loads of books that are about queer takes on Judaism.”

Nothing about being in a relationship stops you from shouting your pride from the rooftops. Wear cute queer pin badges. Put a rainbow flag in your social media bios. Make content sharing your experience. Correct people if they assume you’re straight.

“I do feel more validated in my bisexuality when I’m vocal about it”, says Londoner Melanie*, 26, a psychologist, who also notes some “internalised biphobia” in this, “because It shouldn’t need to be ‘visible’ to be valid.”

That said, if you want to wear pink, purple and blue, go for it.

Be open about open relationships

I hope it’s evident there’s more to being bisexual than sex! However, if exploring your sexuality in the bedroom is important to you, but you don’t want to break up, there are options – you might want to discuss going open. Ethical non-monogamy tends to be more accepted in queer communities, so do your research and learn from the shared experiences of other relationships.

Ensure you consider why and how it would feel like a positive step for both of you – one that feels equal. Establish rules and boundaries upfront, such as whether you want open communication about other partners, or a ‘don’t tell’ policy. You don’t have to be any particular kind of couple for an open relationship to work brilliantly for you. But it isn’t an easy fix-all either.

The benefits of being queer in a ‘straight’ relationship

It it feels like there are only challenges to being a queer person in a straight-presenting relationship, I want to confirm there are unique positives too:

Chatting about how attractive women are! We discovered my partner and I both have a type, and that type is the same. When we’re out together and see someone cute, we’ll share a look that descends into giggles. Well, it’s good for couples to have interests in common! 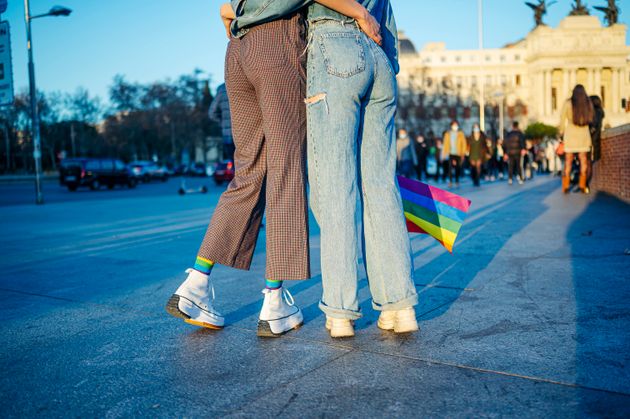 Less pressure to conform. Queer people have been at the forefront of dismantling patriarchal ideologies around commitment such as marriage (not least because of their continued exclusion from the institution). I think this has contributed to us feeling free to make our lives together in a way that feels right for us as individuals, rather than conforming to traditional expectations.

Educating each other. My partner is a better LGBTQ+ ally than he would have been before I came out. But it’s also been helpful for me to separate him from the disreputable ‘straight white man’ stereotype: being around a nice example has helped to disrupt my own assumptions, too.

Normalising boring bisexuality. There are still problematic media stereotypes of bi people as hypersexual homewreckers. I like the thought that my frankly mundane little domestic life is actually a kind of radical bi representation. Go me, doing the laundry.

From the inside, it’s easy to feel like being bi is being half-invisible no matter what you do, but by knowing that you don’t have anything to prove, and that your identity is not defined by your partner(s), you can start to enjoy the huge amount of queer joy available to you, too.

I hope you find these ideas helpful, but what a relief to know that there truly is no wrong way. You do you, and that’ll be exactly the right way to be bi.

Double Booked by Lily Lindon is published on June 9 by Head of Zeus.

*Some names have been changed and surname omitted to offer anonymity.