If you purchase an independently reviewed product or service through a link on our website, SPY.com may receive an affiliate commission.

It’s a strange time for hats. Bucket hats are back, cowboy hats are riding into town and the most popular baseball caps are dad hats. The confluence of these seemingly disparate trends is the Bass Pro Shops trucker cap. This humble $6 cap with mesh paneling and a plasticky logo of a fish has suddenly become the most fashionable piece of headwear, in no small part due to TikTok. The Wall Street Journal clocked this trend in December 2021, and these hats are still everywhere half a year later.

This trend was going strong long before it caught the eye of The Wall Street Journal, though. Peruse Reddit, and you’ll notice a steady stream of mostly confused commentators wondering why these hats are popular, dating all the way back to April 2021.

Unlike the Balenciaga Triple S from a few years ago or the sustained popularity of Yeezys, the Bass Pro hat is an on-trend item that’s not expensive to try. The hats clock in at a mere $5.99, and neither their explosion in popularity nor rising inflation has caused the price to go up. Why not? In short, it’s free marketing for the brand. Like a $1 hot dog at Costco, its true value has nothing to do with money. John Paul Morris, Bass Pro’s chief customer officer, was quoted in the Journal saying, “We love seeing our customers out there wearing their Bass Pro hats.” 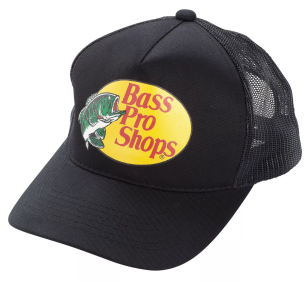 But like all trends, this one has engendered its own backlash. One Bass Pro shopper garnered thousands of views on TikTok railing against the trendiness of the cap, pointing out that the hat is harder to find now. Ironically, his rant was shared to TikTok, the platform that arguably made this hat popular among non-anglers. The hat is so popular that people are even flipping it, and you can find dupes on Amazon for $15. The going price on eBay is about $17. That’s not much for a hat, but it’s a major markup for one that’s supposed to be $5.99.

So what’s up with these hats? Whether or not you like how they look, it’s hard to deny their practicality. They come in a lot of colors and are cheaper than most hats, and since they’re trucker caps, they’re more breathable and lighter than standard ball caps. It makes sense since these ball caps were designed for, you guessed it, fishermen. Of course, most trends are not dictated by functionality, and the same is true here.

While it’s impossible to pin down this trend to one single origin point, the Bass Pro Shops hat is the perfect microcosm of a few trends that have been happening in the last several years. One trend is, simply put, irony. The tackiest styles of the early 2000s have made a major comeback; weird layering, unnecessary embellishments and jeans that don’t fit are all part of the zeitgeist. Crocs are everywhere.  The mesh paneling and tall crown of the Bass Pro hat harken back to the days when the Von Dutch trucker cap reigned supreme, without going full aughts cosplay. The fact that the people wearing them have likely never fished (or possibly even set foot in a Bass Pro Shops) is precisely the point.

Another catalyst for the hat’s popularity, and one that’s potentially more thorny, is the appropriation of blue-collar, middle-American sensibilities and work wear by cool teens and white-collar creatives. The most stylish pants right now aren’t made by high-end designers, but by Dickies and Carhartt. Double-knee pants are being worn by people who sit at desks, and Realtree camo is being sported by people whose intention is to stand out in the city, not blend into the trees. Wearing a $6 fishing trucker cap to a hip restaurant in New York City is part of the same trend.

On the other hand, how much can you really gatekeep practical clothing? Fashion has always been about taking clothes and putting them in a new context, whether that’s Coco Chanel’s Breton stripes, the proliferation of punk rock and hip hop into high fashion, or the resurgent popularity of hiking clothes. If only workers could wear workwear, most of us wouldn’t be able to wear jeans. A breathable, affordable hat feels like it should be fair game, even if you’re not an angler. But if you ever do decide to go fishing, you’ll know exactly what to wear. Or maybe wearing a fishing hat to go fishing is way too obvious.

Our 15 Favorite Dad Hats to Top Off Your Outfit