1. Tell us a little about yourself

Hi, everyone. I live in North Texas (*waves to Texas Rachel*) with my husband of 22 years and our two children, aged 12 and 7.

I’m a librarian and my husband is a programmer, though since our son was born he’s chosen to work limited contract hours to be the stay-at-home parent/household engineer.

We tend to be protective of our family’s personal information (see: librarian and programmer), so we rarely name our kids or share their photos online, but we will sometimes post pictures like these: 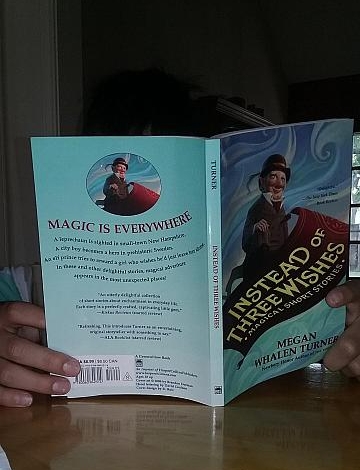 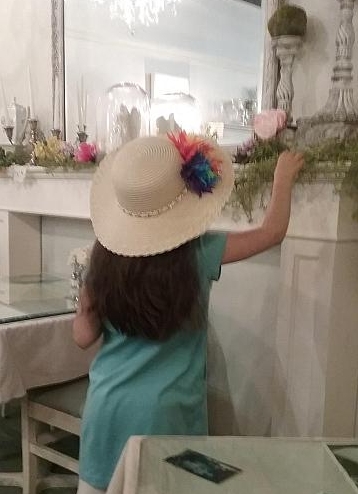 I’ve worked at my library for 18 years in a variety of roles. Currently I manage the collection.

In conversation with me, you’ll want to avoid soap-box topics like the pitfalls of licensing (as compared to owning) content, publishers who include sticker sheets in books, and why some books are classified as “young adult” when similar books are marketed for an “adult” audience.

Reading and baking are my two main hobbies, so if I had an Instagram account (which I don’t), I’d call it MostlyBooks&Food and it would feature pictures like this: 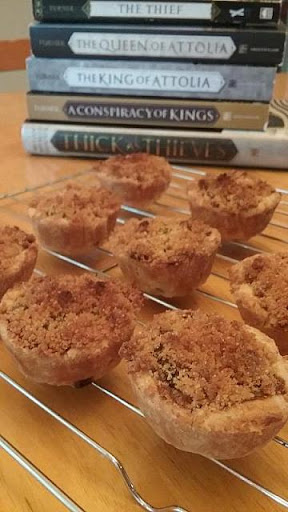 I love finding the right readers for my favorite books and authors.

(This is another way of saying that I’m not a very good readers’ advisory librarian; if I was, it would be the other way around.)

Given the courtesy and graciousness of the community here, the series I would recommend to everyone is Van Reid’s Moosepath League, which starts with Cordelia Underwood, or the marvelous beginning of the Moosepath League.

Set in 1890s Maine, the books feature the most delightful characters, P.G. Wodehouse-esque humor, Dickensian names, and rambling storytelling in the tradition of News from Lake Wobegon.

“This continued affinity of mind encouraged them. It bode well for the human race if they, despite their separate political affiliations and religious backgrounds, could think so alike.” (Mollie Peer, or the underground adventure of the Moosepath League)

For Kristen’s medical reading I suggest everything by surgeon Atul Gawande. Complications and Better are probably most career-relevant, so you might start with those.

Being Mortal: on medicine and what matters in the end may be the one book I’d make mandatory reading for all American adults.

I started with The Checklist Manifesto because my other professional / personal interest is in the area of continuous process improvement / Lean / the Toyota Production System.

But that’s probably another topic best avoided before this post attains novel length. 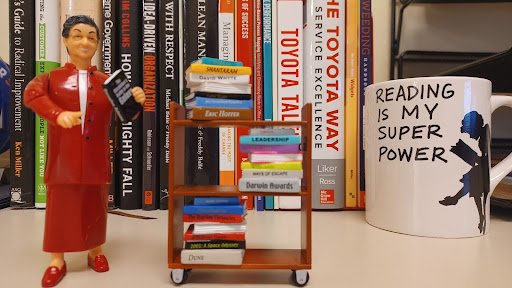 Finally, I should confess that Kristen and I have vastly different opinions on pie. Thanksgiving Day Pie Lunch and Pi Day are among our important food-centric family celebrations. 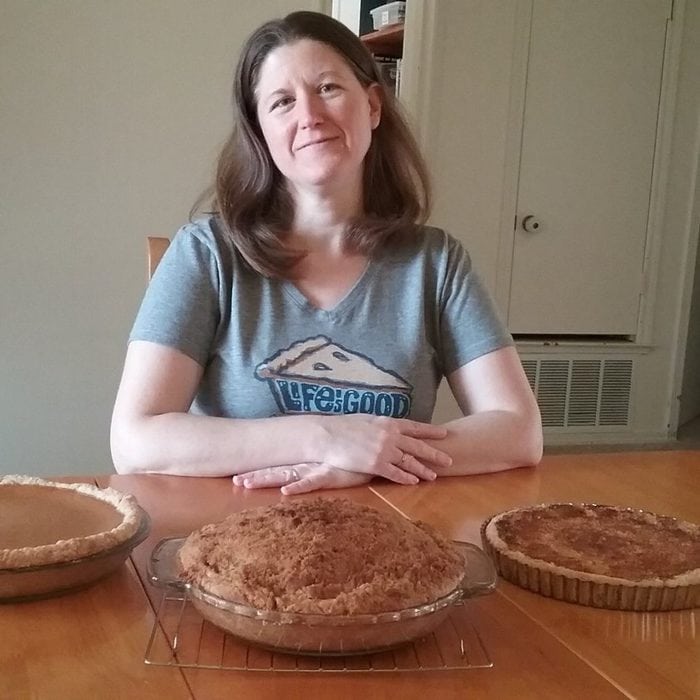 French apple is my specialty, lemon chess is a family favorite, and I also make pumpkin pie for Thanksgiving. In addition to my pie t-shirt, I have a fair-sized wardrobe of book-related clothing.

2. How long have you been reading The Frugal Girl?

Several years, but I couldn’t begin to pin it down more than that. What I do remember, though, is that my sister-in-law recommended this blog to me the same week a co-worker recommended the Non-Consumer Advocate by Kristen’s friend, Katy. I still read them both.

We live in a small house (just shy of 1300 sq ft) and I find a cluttered environment stressful, so Katy’s emphasis on experience gifts is one idea I’ve tried to implement more (and encourage extended family members to give).

While I rarely read comments, much less write any myself, I (as many others have said) enjoy the friendly, cheerful atmosphere here. And I love knowing that when I do read the comments they’ll be warm and gracious, too. (Even when they’re about politics!)

Since I dislike shopping, I particularly appreciate Kristen’s product reviews. (We use Ting and I have a black wool pea coat.)

Finally, since the city I live in is highly affluent and consumption-centric, I like being reminded that there are others who share my “happy with less” lifestyle.

Mostly I think it’s because I never saw anything else modeled.

We weren’t truly poor growing up, but money was tight and my sister and I saw our parents manage that – from direct withdrawals from paychecks for the Christmas fund to envelopes for different types of spending, to making lists of needed home improvements and then prioritizing them.

4. What’s the “why” behind your money-saving efforts?

It turns out that we really, really dislike being in debt. The fact that we were both working, but living on only one of the incomes, for 8 of the 10 years before our son came along means we were able to bank a lot early.

I also prefer having money in the bank to having stuff. Money is fungible – you can turn money into just about anything else when you need to. That’s not always true of stuff (and I don’t want to spend my time selling stuff).

My father was a high school teacher and when his students complained about how broke they were, he’d ask how many pairs of jeans they owned and how much, on average, a pair cost. Then he’d have them do the math. They weren’t broke – they had turned their money into more clothes than they could wear. I guess I absorbed that lesson.

And finally, I’d rather give money to a good cause than spend it on myself. That’s another thing my husband and I both saw growing up – making sacrifices to have more to give towards the needs of others.

This applies not just to money, but also to time. We both lived in Peru as children because our parents did short-term missions work with Wycliffe Bible Translators.

Probably marrying my husband. We wed a month after graduating from college. His father was a professor at the college we attended, so my husband attended tuition-free and graduated debt-free.

After our wedding, he emptied a fund his grandparents had set up for him and paid off my student debt. (That fund lost half its value about a month later in the dot-com crash, so we really lucked out.) 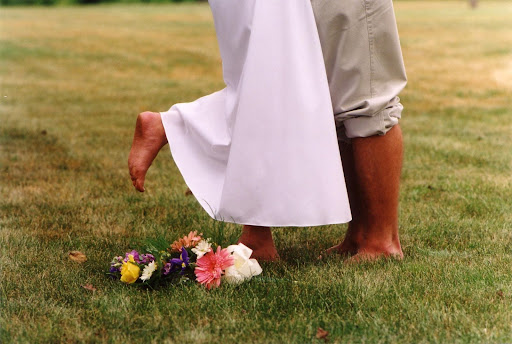 We had a small, inexpensive, outdoor wedding. The goal was to be married at the end of the day. Seems to have worked out.

I wish we had started college savings accounts for our kids earlier. They won’t have the benefit of going tuition-free.

7. What’s one thing you splurge on?

I borrow many, many more books than I buy, but I have started supporting my favorite authors by buying their new books, particularly if I can purchase from their independent, local bookstore and get an autographed copy. 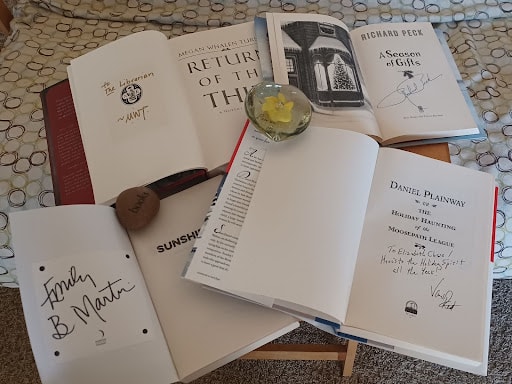 Autographed copies of books by some of my favorite authors: Megan Whalen Turner, Richard Peck, Van Reid, and Emily B. Martin

I love to bake, but nothing too finicky, so occasionally I treat myself to something(s) at the local French patisserie. 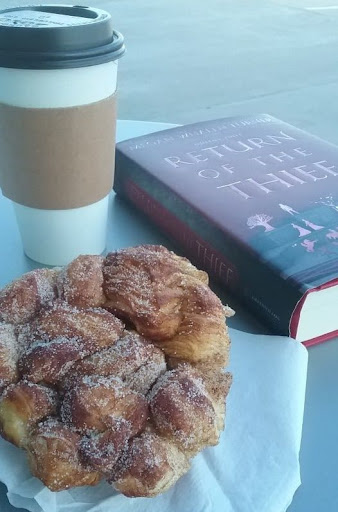 Cinnamon-sugar pull-apart made with croissant dough, hot chocolate, and the final book in the series by my favorite author, Megan Whalen Turner

8. What’s one thing you aren’t remotely tempted to splurge on?

Anything to do with a high-maintenance lifestyle. I score a 0 on those “how high maintenance are you?” quizzes.

I’d love to say that I’d put it towards a trip to one of the four places on my travel wish list but, undoubtedly we’d do the same thing we do with all unexpected income:

Give extra to one or more of the organizations we support and bank the rest. Maybe splurge on an extra night of takeout.

10. Share a frugal tip with other Frugal Girl readers

The obvious one is: use your local public library!

I’m generally reading at least 3 books at a time (fiction, nonfiction, and eAudio), so I can’t afford my book habit, much less my family’s. We often have 50+ books checked out at a time. 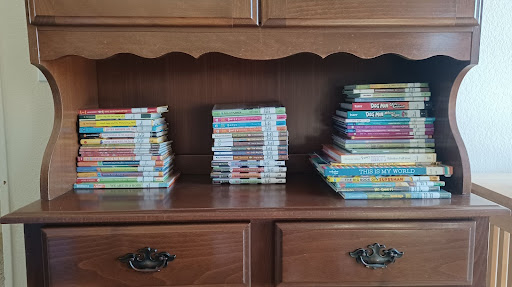 The books we currently have checked out for the 7yo. The 12yo has more than 20 just from our last trip to the library.

For things we already own I try to follow the Non-Consumer Advocate motto: use it up, wear it out, make do, or do without.

When I finally decide to buy something, I try to make sure to get something high-quality with all the features I want.

When I’m comparison shopping, I think through function first, then form: does it do everything I need it to; how hard is it to clean; how much work is it going to take to maintain; will it hold up over time? And then I think about form.

William Morris said, “Have nothing in your houses that you do not know to be useful or believe to be beautiful.” I try not to buy anything that’s not useful and beautiful.

Since all of that sets an exceptionally high standard and I really, really dislike shopping, I mostly end up making do or doing without, which is pretty frugal.

11. Is there anything unique about frugal living in your area?

This has been the hardest question to answer. Frugal living is certainly not what our area is known for.

As a city employee, however, I know that we have a fiscally conservative City government, so city services are run as efficiently as possible, with a goal of continuous improvement.

Whether that’s unique or not, I don’t have the experience to say. But libraries, parks, and other city services are definitely worth looking into if you’re not already using them.

E, I have to tell you that I love Atul Gawande. And yes, Being Mortal is such an important read; most of us will face aging and illness at some point, and I think it’s so much better to think about it and discuss it ahead of time rather than ignore it!

I have Better in my library stack right now, and I also read The Checklist Manifesto. Did you like When Breath Becomes Air, by Paul Kalanithi? That’s my favorite medical memoir ever! Such beautiful writing.

One question: are books with stickers just annoying for a library because then the stickers are only good for one patron?

Readers, leave your questions and comments for E!

P.S. If you want to see the list of medical memoirs I’ve read, here’s a whole list of them, with a couple of new ones since I first published the post.

The post Meet a Reader | Librarian E, from Texas appeared first on The Frugal Girl.