The Godfather the iconic trilogy that captured the imaginations of men across generations. A tragic story about a young and idealistic man as he snuffs out his own soul in pursuit of power. As a style blog, we want to focus on one thing: style.

We will be focusing entirely on Part 2. Let's not waste any more time and delve in. 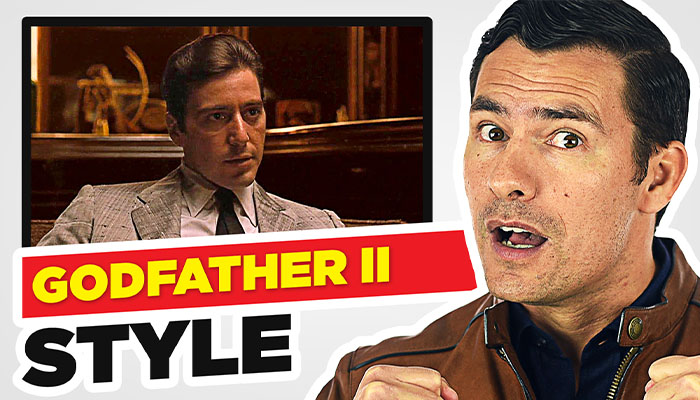 The style in part 1 is superb but limited. The film takes place mainly in New York with brief stops in Sicily, California, and Nevada. There is almost no seasonal variety to boot. Part 2, on the other hand, is varied. The story spans Nevada, Miami, Havana, Sicily, and New York. The film covers almost 60 years, giving us unprecedented variety in style.

The film opens in 1958 Nevada, where the Corleone family celebrates the first communion of Michael's son, Anthony. Michael, of course, is the trilogy's main character.

Celebrations are short-lived as Michael deals with his dysfunctional family, his brother's incompetence, and a corrupt senator. 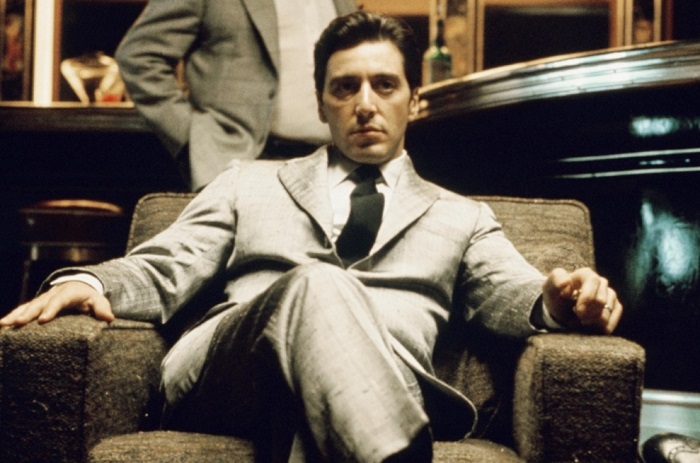 The first sequence gives a good indication of The Godfather's personal style: Simple and pragmatic.

Costume designer Theadora Van Runkle debuts Michael in a simple yet luxurious look, making one lethal (and he is lethal) combination.

Despite being quite a powerful man, Michael's wardrobe is simplistic and limited. The overall look is plain he doesn't wear a tie pin nor a watch for added pizzaz. The only visible jewelry is a wedding band on his left ring finger. To be honest, he doesn't need to be showy to get your attention.

Fredo is introduced in the same sequence as Michael in the silk suit. Though Fredo is much older, he's an idiot. He means well but is incompetent and weak something that Michael deals with throughout the film. 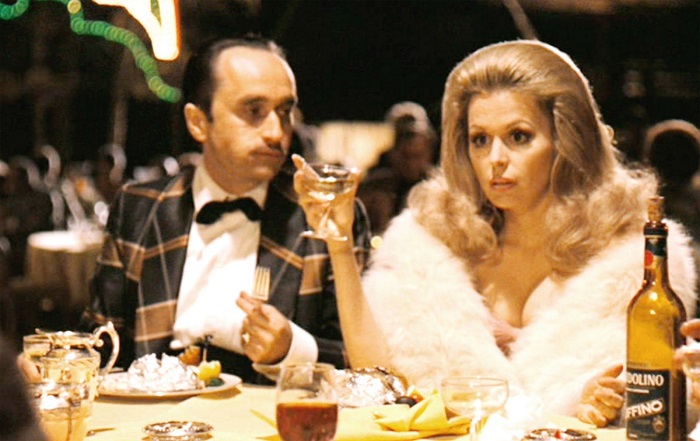 Fredo consistently makes a fool out of himself. His wife doesn't even take him seriously. Click here to learn about the subtle signs women notice about men that put them off.

Once again, Theadora Van Runkle captures the essence of the character through their style. In Fredo's case, it is clumsy and stupid.

Fredo contrasts Michael in several ways one way is the way he dresses. He can't seem to decide whether it's a formal or casual occasion. His jacket and dress shirt are oversized. The jacket falls straight down while the shirt sleeves extend well beyond a half-inch from the jacket cuffs. His trousers also flair out. Fredo breaks the rules of style in all the wrong ways.

Students of history will know that 1950s Havana was a playground for the mob. The Godfather II plays on this and integrates it with the plot. Michael travels there to invest 2 million dollars but is then unsure about the island's stability.

Here, we get an excellent example of a simple summer style. 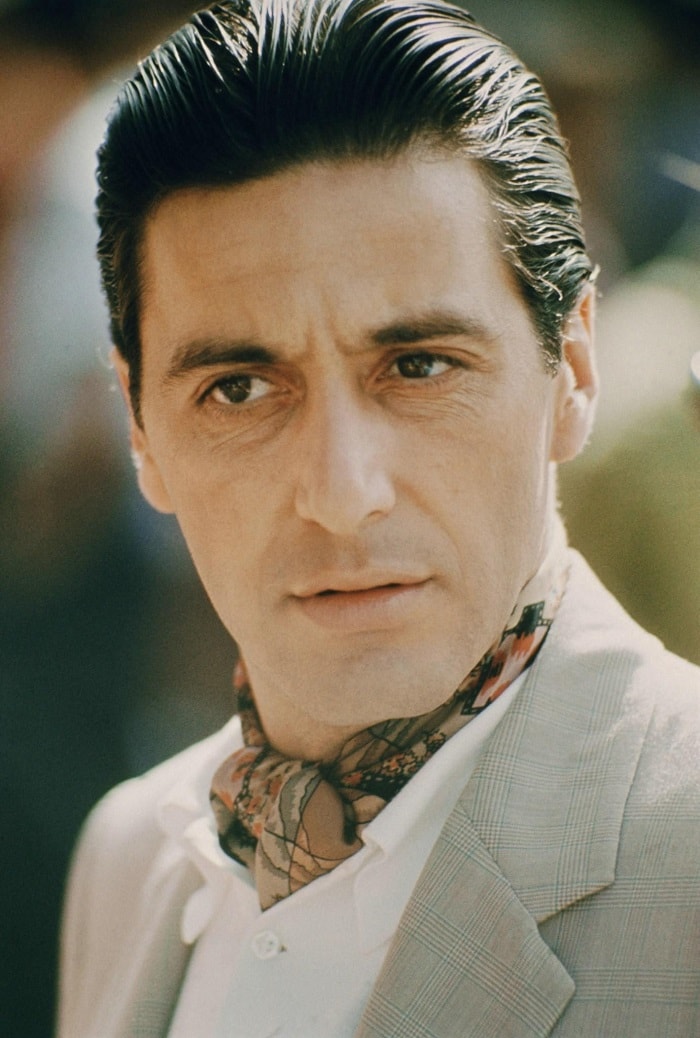 The glen check is barely discernable, but the Prince of Wales pattern stands out. If you need a summer style icon, look no further.

Designed by Theadora Van Runkle and crafted by Western Costume Co, This look is iconic as it is featured in the movie posters. Michael brings simplicity to the summer. Indeed, the wildest detail is perhaps the cravat which we might consider outdated. Otherwise this is as timeless as casual style gets.

Click here if you want to learn more about mastering summer style.

Between 1917 and 1920 in NYC, Don Fanucci rules the neighborhood where Vito Corleone (Michael's father) lives. He ruthlessly extracts a percentage from all businesses less they suffer his wrath. His flawlessly white-on-white suit is his signature look. 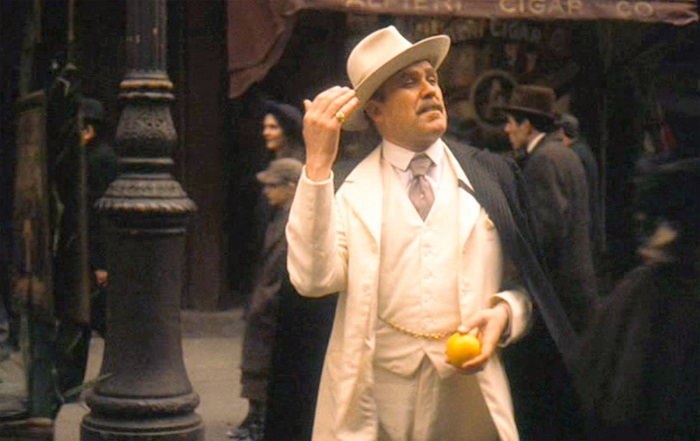 Do you love white? Here's your man. Just don't imitate his personality

Don Fanucci wears the same suit faithfully until it gets riddled with holes by the young Vito Corleone, who then usurps his title.

The movie switches between Michael and his father Vito in flashbacks so as to contrast the two. Young Vito's story takes him from a penniless immigrant to becoming the first Godfather. By 1920, he is an influential member of his community who can afford quality clothing. Let's see if he pulls it off. 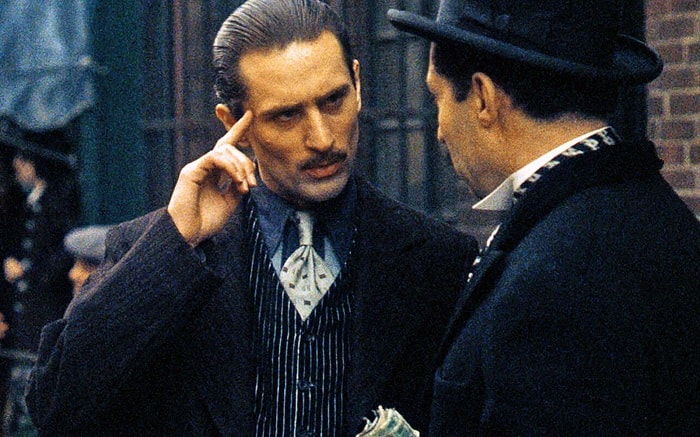 In this scene, Vito confronts an oppressive landlord about evicting a helpless old widow.

Interestingly enough, Vito uses the same dress shirt in earlier scenes where he is impoverished. When pairing it with such extravagant new clothes, it marks the character's transition from poor to wealthy.

In the summer of 1923, Vito returns to his hometown of Corleone, Sicily for two things: Olive oil investments, and revenge.

At the very beginning of the film, Don Ciccio murdered Vito's father and older brother. His mother was shot in front of him while he escaped. Decades later, now a grown man with money and power, he returns to get even. Once again, Theadora Van Runkle works her magic. 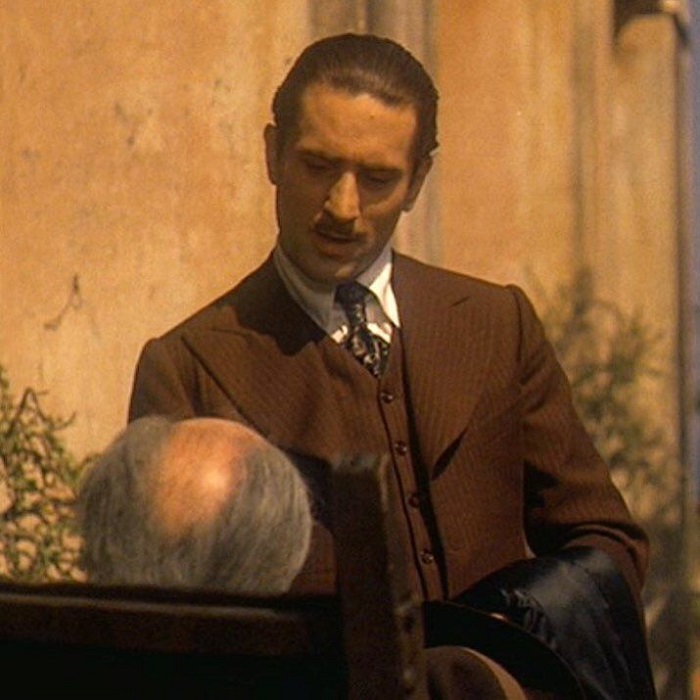 You could do worse when setting out to make things right for your family.

Sicilian summers can get into the 80s Fahrenheit, which makes you wonder why he chose a woolen suit and overcoat to wear. Nevertheless, it is a stylish ensemble worthy of avenging one's family.

Tom is an important character through Godfathers 1-2. He is Vito's consigliere(chief advisor) throughout the first film as well as the family's top lawyer in both. His wise counsel is gradually ignored by an evermore bloodthirsty Michael.

Nevertheless, he is loyal to a fault and spearheads Michael's defense. Let's see if the style matches the spirit. 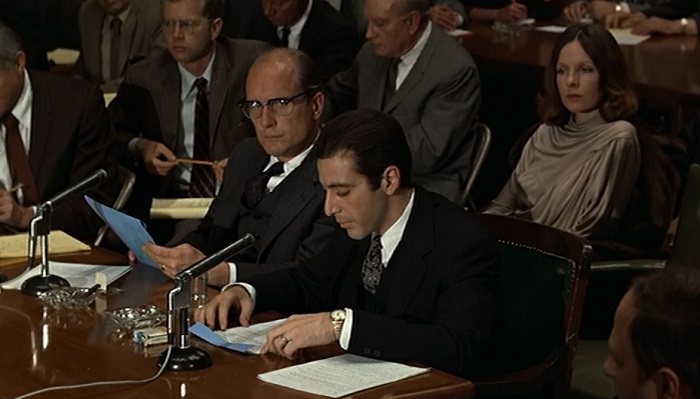 In this scene, Tom has Michael read a statement that he hopes will make the jury sympathetic.

Throughout both movies, Tom embodies the business suit. All his looks are classic and formal. It makes sense considering he eats, breathes, and sleeps law to protect his adopted family.

Thought the Godfather Part II we see a huge variation in styles influenced by profession, climate, and time period. Aside from its rich story and flawless acting, the beauty of this film is that it allows stylish gents to take inspiration from countless sources.

The post The Godfather Part II: The Style Behind The Mob appeared first on Real Men Real Style.