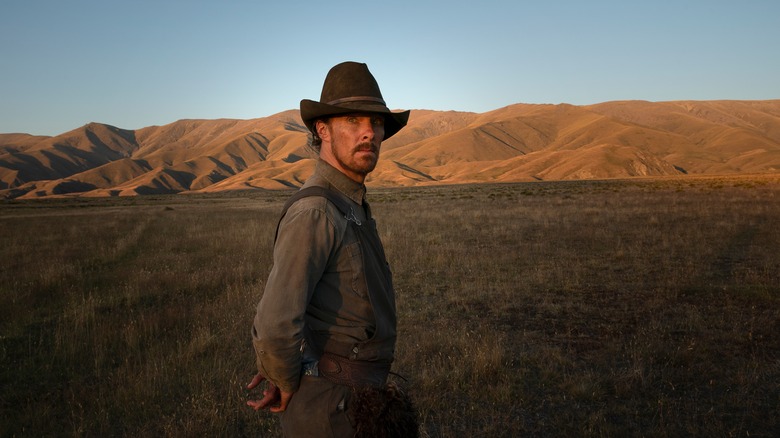 "What kind of man would I be if I didn't help my mother?" So says Peter (Kodi Smit-McPhee) at the start of "The Power of the Dog," Jane Campion's quiet-yet-menacing neo-Western. We hear Peter say these words before we've even met him, and it will take almost the entire film before we find out what they truly mean. With this moment, Campion, adapting the novel by Thomas Savage, is setting a trap. The entire film feels like that; like something hypnotizing us, lulling us in, ready to strike us down at the very last second. The devil is in the details here, and Campion focuses on those details with a fetish-like eye – rough hands pulling taught ropes; fabric stretched shroud-like across a face; nude bodies caked with mud; and land – all that wide-open land, which somehow looks both gorgeous and ominous.

"The Power of the Dog" is set in 1920s Montana, but Campion shot it in New Zealand, and the geographic distance doesn't matter – she has perfectly transported the story, and us, to this land, to this time. Or at least a hazy, haunting dream of this time. Mountains roll on as far as the eye can see. Thick, fleece-like clouds soldier on across the sky. And everything seems vaguely threatening. A foreboding tone blankets "The Power of the Dog," putting us on edge nearly from the jump. Even when mundane, harmless things are happening, the tension mounts. The harmless seems harmful. Silence speaks volumes. This is a subtle movie that manages to knock us flat. 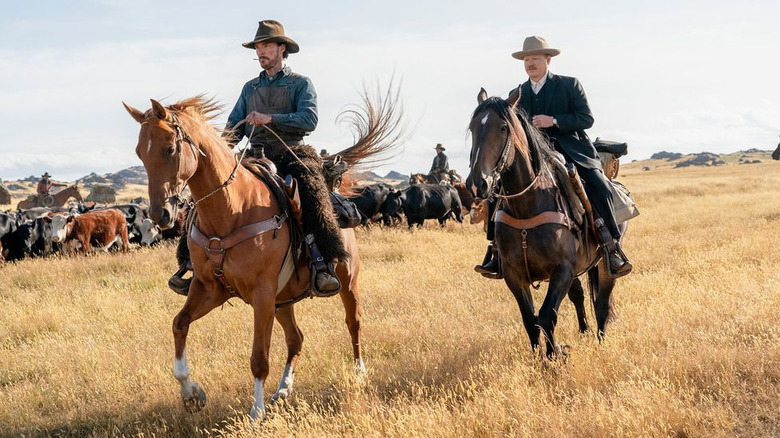 Phil Burbank (Benedict Cumberbatch) and his brother George (Jesse Plemons) are wealthy cattle ranchers. We get the sense that they don't need to be doing this anymore; that they don't have to play cowboy and ride out into the dust. But they do, and it's probably because of Phil, a Yale-educated scholar who has fully embraced the cowboy lifestyle. Indeed, Phil is so engaged in the idiosyncrasies of cowboy life that he seems completely out of time – as if he were straight out of the 1800s instead of the 1920s. When he's not cutting the testicles off bulls or rolling cigarettes, Phil uses his massive intellect to put everyone around him in their place, and in his eyes, their place is beneath him. He is cruel, cutting, and downright scary. He bellows in rage at a group of cheerful folk gathered in celebration, and they scurry away in silent terror like chastised children being sent to their rooms.

Where Phil is cold, George is kind, albeit in an awkward, clumsy way. He doesn't have Phil's smarts or his gift for gab. There are times where he's downright monosyllabic, unable to string more than two or three words together. But he comes off as far more sympathetic, primarily because he always looks pained by Phil's cruelty. One evening, Phil, George, and the rough-and-tumble cowboys who work for them dine at an establishment owned by widow Rose (Kirsten Dunst). Her son Peter, owner of the voice we hear at the start of the film, works at the restaurant, too. He's a shy, awkward young man; rail-thin, ghostly pale, eyes wide. Occasionally, he talks with a lisp. He is slight where other boys his age are sturdy. Phil immediately picks up on these traits and sees them as weaknesses. And when Phil spots weakness, he pounces. He humiliates the boy so harshly that it leaves Rose in tears. George, the good brother, comforts her – and before you know it, the two have fallen into a clumsy love affair and are quickly married.

While George does seem to love Rose, he's not the best at showing it. He remains willfully oblivious to her needs, and her discomforts. When he insists that she play the piano for a dinner party, Rose pleads again and again that she'd rather not. He ignores her and brings in a brand new piano for her to play. He takes Rose back to live with him in the huge ranch house he shares with Phil and two servants (Genevieve Lemon, and an oddly underused Thomasin McKenzie). Rose is an immediate outsider, and while the servants eventually come around to her, Phil remains nasty. When Rose tries to make nice he scoffs and calls her a "cheap schemer." He's convinced that she just married George for the family's money. Or is he? Does Phil really dislike Rose for that reason, or is he just resistant to any outsider coming into his life? Whatever the reason, he makes Rose's life a living hell. And George seems completely oblivious to this, too, leaving Rose in the house with Phil for days on end while he goes off on business. Rose grows so disheartened that she descends into alcoholism, stashing bottles of booze all over the house and spending days on end passed out in her room.

Cumberbatch Has Never Been Better Than He Is Here 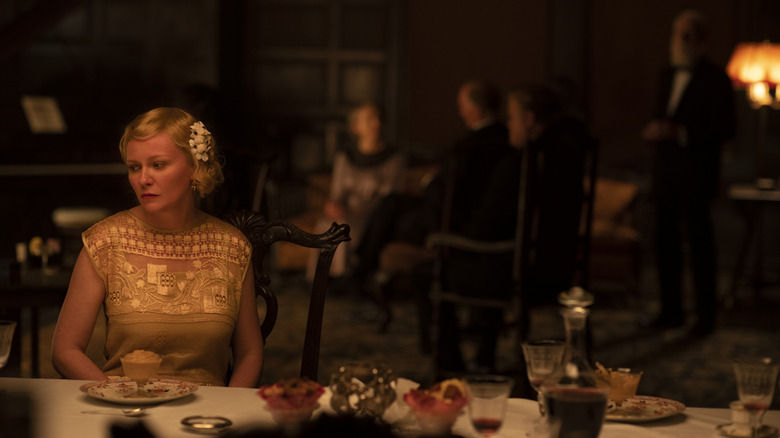 Peter comes to live in the house, too. Phil is once again cold and cruel to the boy, eyeing him with contempt. Peter, meanwhile, appears off in his own inner world, unable and unwilling to even pretend he's not the strange young man that he is. He's an enigma; a curious boy who tucks stray flowers into his pockets and who has a keen interest in anatomy. The bad energy continues to build, and we think we know where this is leading. But it's impossible to pin down what Campion creating here at first; the cards are played extremely close to the vest. We will only know things when Campion damn well wants us to know them, and not a minute sooner.

A curious thing happens. Phil abruptly changes his tune and begins taking an interest in Peter. We are given hints and clues as to Phil's motivations – stories from his past involving a now-dead mentor-figure known as Bronco Henry. "When did Bronco Henry teach you to ride?" Peter asks. "When I was around your age," Phil says, his reply loaded with an unspoken weight. Deep in the woods, tucked away, Phil keeps a secret box that contains a bit of fabric embossed with the initials BH. He handles that bit of fabric in suggestive ways. But he never articulates things. He doesn't have to. We follow along, even if we don't know all the details.

The cast here fit all their characters like a glove. Dunst is perfectly sympathetic, and even a little pathetic, as the put-upon Rose. Plemons is suitably clumsy yet likable, clueless yet sweet; one of the most remarkable scenes in the movie comes after Rose teaches Geroge a few awkward dance steps, leading George to softly weep and say, "It's so nice not to be alone." Smit-McPhee plays Peter as a walking mystery, an internal character we wouldn't think twice about if we saw him in public. But "The Power of the Dog" truly belongs to Cumberbatch, who has never been better than he is here. His considerable cheekbones peppered with sandpaper stubble, his clothes and skin filthy with the land, his overall aura domineering, Cumberbatch is so commanding here that it starts to get downright scary. We both look forward to and dread when he'll appear on screen next. I've enjoyed a lot of Cumberbatch's work, but none of it comes close to what he's doing here.

As "The Power of the Dog" rolls into its jaw-dropper of a conclusion, we are left drained, pulverized, as if we've been put through the wringer. Campion hasn't helmed a feature film in nearly 12 years, and here she comes back with a vengeance, with supreme command of her imagery. I'm not anti-Netflix by any means, and I'm thrilled the streaming giant continues to throw money at great filmmakers. But it seems almost a pity to picture such a subtle, emotionally pulverizing movie playing on Netflix while the viewer spends most of the time checking their phone. But perhaps I'm generalizing. Perhaps "The Power of the Dog" will find exactly the audience it needs and deserves. An audience ready to be transported into a completely different world; a fully realized scary-beautiful world brimming with meticulously drawn characters who intrigue, confuse, frighten, and ultimately thrill us.

Read this next: Power Of The Dog Trailer: Benedict Cumberbatch Leads A Star-Studded Netflix Western

The post The Power of the Dog Review: Jane Campion's Stunning Neo-Western Has a Career-Best Performance From Benedict Cumberbatch [TIFF 2021] appeared first on /Film.